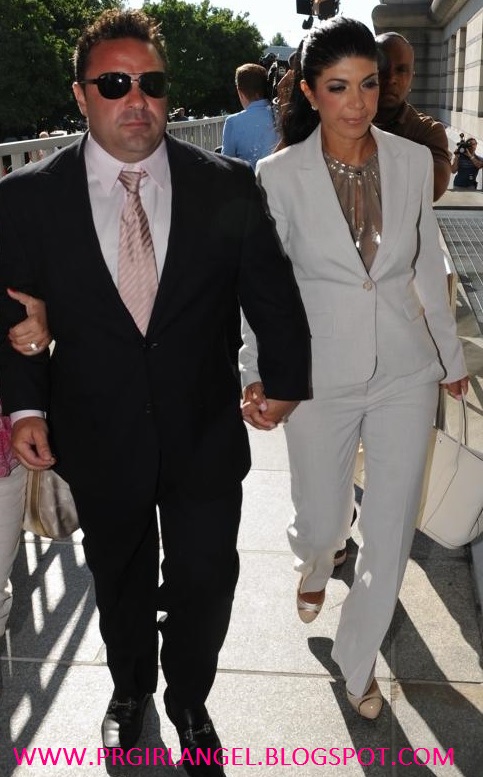 Judge Cathy Waldor ordered the 'Real Housewives of New Jersey' couple set free on $500,000 bond each, and they were ordered to give up their passports and limit travels to New Jersey and New York after being indicted on fraud charges.
Reality TV stars Teresa and Joe Giudice were their crassy selves Tuesday as they went before a judge to answer federal fraud charges.
The thick-necked husband of “The Real Housewives of New Jersey” star slapped a news camera out of his way as he and his moll made their way into Newark’s federal courthouse.
“Calm down, Joe,” his lawyer, Miles Feinstein, pleaded. “Don't do that.”
Teresa, dressed in a white pants suit, and Joe, encased in a dark suit, looked like they were digesting bad scungilli as Judge Cathy Waldor ordered them released on $500,000 bond each.

“Yes,” they each answered tensely when Waldor asked them if they understood.
Neither entered a plea. Joe was released on a bond secured by his father, Frank. Teresa was released on an unsecured bond.
The Giudices were also ordered to give up their passports and told to limit their travels to the Garden State and New York.
Joe Giudice, whose real first name is Giuseppe, is an Italian citizen and could face deportation in convicted, the judge and prosecutors noted.

The accused couple, who are due back in court Aug. 14, refused to speak with reporters. And Giudice’s dad gave reporters the finger when they returned to his son’s ersatz Montville Township mansion.
“They profess their innocence,” Feinstein said. “A coin has two sides. There is another side here that you haven't heard, but you'll hear in the courtroom, and we're going to prepare the defense accordingly.”

Teresa's lawyer, Henry Klingeman, claimed his client is “being targeted because of her celebrity” and insisted “the family's handling themselves with great dignity.”
Noting that Teresa does not have a criminal record, Klingeman added, “We hope that she's vindicated and spends no time in jail. But it's a federal case and there's always a risk of jail.”

Teresa is know for her nonchalant approach when confronted about her and her husbands legal issues. But she cant run from this truth, as she is named as a plaintiff also. Let's see what method she uses this time to blow off these legal issues now that she is confined to New York and New Jersey. No more fancy trips to Italy for now.

Posted by PRGirlAngel at 3:16 PM