Dancehall artist Macka Diamond posted a very controversial picture on her Instagram a short time ago. 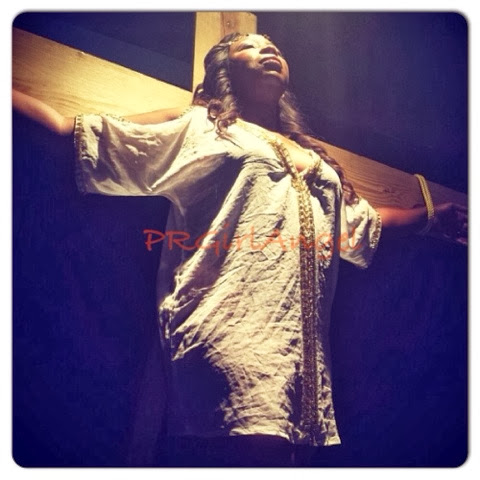 This is of course a very controversial picture, and I can imagine the video will be as well. Her caption below the picture states "Tell wicked heart! Stop fighting me cause people like di likkle light in me"
Be that as it may Macka, I have a feeling this isn't gonna go over well with your religious, God fearing fans.
Some of her Instagram followers replied: "Tf??" (meaning what the fu%#) and
"Um dat an abomination for yuh nuh worthy like Jesus Christ to be pon di cross @mackadiamond1"

This comes all to familiar to the 1999 video for Nas ft Puff Daddy "Hate Me Now" video debacle. The music video for the single was directed by Hype Williams and featured Nas being crucified , was the subject of extreme controversy, as the original edit also featured Puff Daddy on the cross. Puffy had demanded that his crucifixion scene be excised from the broadcast edit of the video, but the wrong edit was incorrectly sent to MTV and TRL, and aired on April 15, 1999. Within minutes of the broadcast, Puffy had barged into the offices of Nas' manager Steve Stoute with several bodyguards, and struck Stoute over the head with a champagne bottle. Stoute later sued Puffy, the suit was settled out of court.

Posted by PRGirlAngel at 5:27 PM