TI and Tiny Break Up? 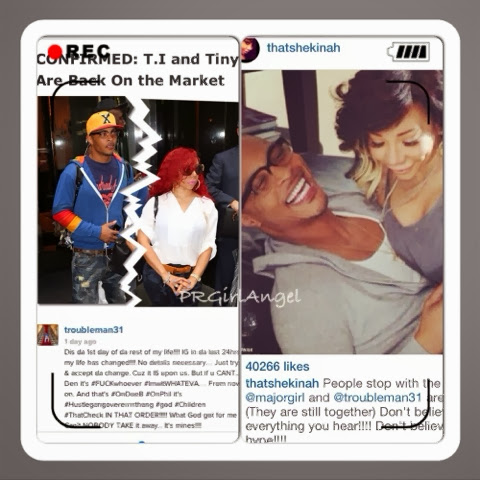 😞 #Rumors are swirling about a possible break up or separation of one of ATL's favorite couples, #TI and #TINY. However, friend to the family and fellow reality star on #FamilyHustle, Shekinah, posted a picture captioned "People stop with the BS @majorgirl and @troubleman31 are good!!!! (They are still together)..."

Earlier sandrarose.com reported "A well-connected insider has just confirmed the rumors that Atlanta Power couple Clifford “T.I.” Harris, Jr. and his wife of 4 years, former Xscape singer Tameka “Tiny” Harris, have separated. The couple reportedly split on on Saturday shortly after arriving in Los Angeles to attend the 56th Annual Grammy Awards, according to my source.

T.I. was so distraught by the break up that he canceled his appearance on Sunday night’s live telecast of The Grammys where he was nominated for 3 awards.

This is very sad news for fans of both T.I. and Tiny. It is unclear how the break up will affect T.I. and Tiny’s popular reality TV series on VH1.

All couples experience ups and downs during the course of their relationships. In Tiny and T.I.’s case, the pressures were unrelenting. For instance, there are rumors that T.I. recently violated Tiny’s trust by sleeping with one of her female friends. But that’s nothing new.

Another rumor has it that T.I. refused to support Tiny’s new business venture, a line of tequila, because he feels it sends the wrong message to their young fans. T.I. and Tiny have 2 sons together. T.I. also has 3 children with other women, and Tiny has a daughter from a previous relationship.

T.I. and Tiny have gone their separate ways in years past, but they always resolved their issues and got back together for the sake of their beautiful children.

T.I. Loves Tiny so much but he’s a man, and as such he should be allowed to do what comes naturally to men. If their Love is strong they will get back together. As my source said, “There’s hope.” " hmmmm..
Posted by PRGirlAngel at 7:28 AM