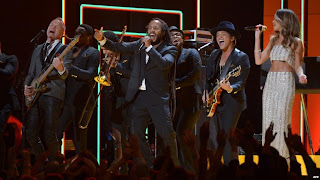 Let me first start off by saying, this was a proud moment for every Jamaican, reggae lover and fan, Bob Marley fan, and Caribbean as a whole. Jamaica stamped the official seal of approval on the 2013 Grammys, and for this, we are ecstatic! On the stage was the legendary Sting, Rihanna, Bruno Mars, Ziggy Marley, and I think Damian "Jr Gong" Marley was there, but his appearance was so fast I could have blinked and missed it. I'm being sarcastic, he was there, and did a wonderful, quick, performance.
However, as proud as I am that Bob Marley was saluted, I have to be honest and say that I feel the performance was rushed, and poorly executed. Let me elaborate. While Ziggy and Jr Gong Marley represented for their father well, where was Stephen Marley?? As much as I love Rihanna, where was Lauren Hill? Let's be real here, she had the hit re-make of his infamous song "Turn Your Lights Down Low". Bob Marley has 11 (known) children, and to only have 2 on a tribute to him in my opinion was an insult. Now let's be clear, their could possibly be many politics behind why these things didn't happen, but since they didn't, I have the right to speak on it.
There are so many other influential artist that should have been on that stage to tribute the great Bob Marley. For starters, his many other musician children, Spragga Benz... the list goes on. This is no disrespect to Bruno Mars, and Riri, but being of Caribbean decent doesn't seem like enough to grace the stage to pay tribute to a legend such as Bob Marley. There should have been a medley of his hit songs.. why were we drowned with a mere few?
I was told by a facebook follower to be happy with the little "they gave us Jamaicans". I feel differently. Bob Marley gave the world, way more than a little. He gave us his life. And I feel he deserved more than what was given to him last night. As influential as an artist and person as he was, he deserved triple the time that tribute was allotted, and quadruple the artist that paid homage. I was very vocal about my views on facebook and twitter last night;

I was asked "ok you wanted to hear the marley acted a fool then next thing you know dem start talk pure thing and never invite us bk to the grammy ,not a good look sometimes we have to be humble remember that ,,,,,there father is a legend thats enough ."

My response was "Demanding what you deserve and is rightfully due is not acting a fool, it's being assertive, BIG DIFFERENCE, that's mental slavery thinking ... Executives do it in business suits in offices every day all day... because dem a Rasta it's considered "acting a fool" NOOOOOOO MAAM! Granted... I cant say they did or didn't fight for it , or ask for it, I'm just basing my thoughts on what I saw.. But like really, Bob Marley have what 11 kids, all musicians, and 2 alone on the stage for HIS TRIBUTE..." 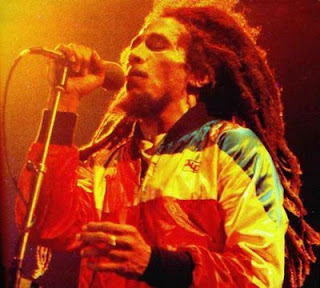 I can't help but to think back to other "Tributes" on the Grammys and other award shows and the amount of production, time and effort that was put into it. Michael Jackson's tribute was a epic production, worth a thousand words. For this, I am speechless.

Bob Marley deserved more. Case closed, deal done. I will not change my opinion or views on that FACT. I am grateful, and danced to every minute of it. But when will we stop accepting the pittance mainstream America wants to give our Jamaican artist??


Posted by PRGirlAngel at 3:32 PM No comments: