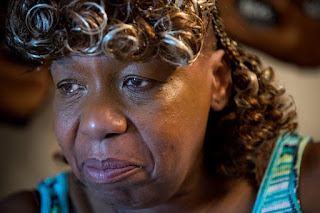 New York City reached a settlement on Monday with the family of Eric Garner, agreeing to pay $5.9 million to resolve the claim over his killing by the police last July on Staten Island, according to a lawyer representing the family.

The agreement, reached days before the deadline to file suit in the death, appeared to be among the biggest reached so far as part of a strategy by the city comptroller, Scott M. Stringer, to settle major civil rights claims even before a lawsuit is filed. Mr. Stringer has said the aim is to save taxpayers the expense of a drawn-out trial and to give those bringing the suits and their families a measure of closure. 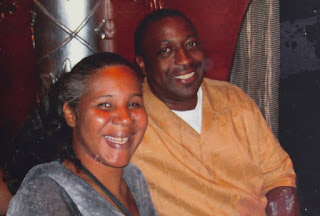 Eleven months after Eric Garner's death, his grave is covered by a lush patch of grass in Union County, N.J. His mother, Gwen Carr, is pulling together money for a headstone.
Last year, Mr. Garner’s relatives, including his widow, Esaw Garner, and with his mother, Gwen Carr, filed a notice of claim — a procedural step that must precede a lawsuit against the city — seeking $75 million in damages. Mr. Garner died on July 17 after a police officer, Daniel Pantaleo, placed him in a chokehold during an arrest as other officers wrestled him to the ground. The confrontation was captured in a cellphone video taken by a bystander.
The medical examiner ruled the death a homicide, citing the chokehold and the compression of Mr. Garner’s chest by the police. In December, a Staten Island grand jury declined to indict Officer Pantaleo.

Jonathan C. Moore, the lawyer for Mr. Garner’s family, said the city had until Friday, the anniversary of the death, to come to an agreement. If none had been reached, a suit would have been filed. 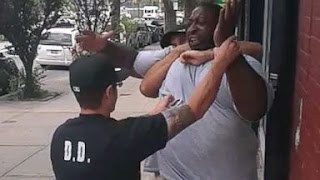 “The City of New York has agreed to pay $5.9 million to resolve the Garner case,” Mr. Moore said.
The death of Mr. Garner, a father of six who was suspected of selling untaxed cigarettes and was unarmed at the time, fueled protests over police killings of black men. His final words — “I can’t breathe” — became a rallying cry. His death, followed by the fatal shooting of Michael Brown in Ferguson, Mo., in August, set off a national debate about police actions in minority communities.

The settlement was reached even as several inquiries into Mr. Garner’s death were still pending, including investigations by the United States attorney for the Eastern District of New York, the Civilian Complaint Review Board and state health officials, who are looking into the actions of emergency medical responders in treating Mr. Garner.

The Police Department has concluded its internal investigation but has yet to say whether any officers would be disciplined.

On Saturday, Mr. Garner’s family is expected to lead a rally, with the Rev. Al Sharpton’s National Action Network, outside the Brooklyn offices of the United States attorney to call for a federal case to be brought against the officers involved in Mr. Garner’s death.

“This is not about people getting money,” Mr. Sharpton said on Monday. “This is about justice. We’ve got to restructure our police departments and how we deal with policing nationwide.”

Mayor Bill de Blasio, speaking to reporters shortly before the settlement had been reached, said the anniversary of Mr. Garner’s death was on his mind. “I think it’s on the mind of many New Yorkers, and we, you know, mourn the death of Eric Garner,” Mr. de Blasio said. “I think we’ve come a long way, even in the last year, in terms of bringing police and community together
In recent months, the comptroller’s office has reached major settlements in several cases without a suit being filed, effectively cutting out involvement by the city’s Law Department.

Mr. Stringer reached a $6.4 million deal with David Ranta, who was imprisoned for 23 years after a wrongful murder conviction; Mr. Ranta had sought $150 million. A deal was also reached for $2.25 million with the family of Jerome Murdough, who died in an overheated jail cell at Rikers Island, to settle their $25 million claim against the city.

In 2001, a suit brought by Abner Louima, a Haitian man tortured with a broomstick while in police custody at a Brooklyn precinct station house in August 1997, was settled for $8.75 million, with the city paying $7.125 million and the police officers’ union, the Patrolmen’s Benevolent Association, which was accused of conspiring to cover up the assault, paying Mr. Louima another $1.625 million.

That agreement was reached three years into the suit brought by Mr. Louima, who was sodomized with the broken broomstick handle. The settlement came after federal trials in which one officer, Justin A. Volpe, was convicted in the attack and sentenced to 30 years in prison, and another pleaded guilty to perjury. Two more were sentenced to probation in the cover-up. Two other officers had their convictions overturned on appeal. 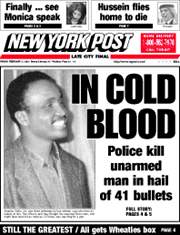 Nearly five years after the killing of Amadou Diallo in 1999, the city settled with his relatives for $3 million. The city settled a suit over the 2006 fatal shooting of Sean Bell for $3.25 million.

In January, Mr. Stringer agreed to pay $17 million to settle wrongful conviction claims brought by three defendants whose cases involved Louis Scarcella, a retired homicide detective whose investigative tactics have come under scrutiny and are under review.

In an interview last December, after the grand jury’s decision, Mr. Stringer called Mr. Garner’s death ”a terrible tragedy” and said “my heart goes out to the Garner family, and I feel very strongly about that.”

some infornation courtesy of New York Times
Posted by PRGirlAngel at 8:46 PM